On June 19, 2014, the U.S. Supreme Court handed down its first software patent case in thirty-three years.[1] In the case of Alice Corp. Pty. Ltd. v. CLS Bank,[2] the Court determined the patent eligibility for computer-implemented inventions. While incorporating its previous analysis of Mayo Collaborative Services v. Prometheus Lab., Inc.,[3] the Court verified that computer-implemented inventions have protection through patent subject matter eligibility; however, the Court limited this protection by finding that generic computer implementation must further transform an abstract idea to be a patent-eligible invention under 35 U.S.C. § 101. The ruling of Alice is significant as it replaces the once general view held by the courts that §101 was nothing “more than a ‘course [patent] eligibility filter’”[4] with a defined patent eligibility filter derived through a two-part analysis that has placed patentability under Section 101 at “a higher bar.”[5] It has not only been the courts who have taken notice of Alice. The USPTO issued advisories and instructions for its examiners and the public at large as to the handling of patent eligibility for software patents and denied pending patents upon the issuance of Alice.[6]The impact of Alice is broad but it appears to be a decision that was long overdue to address the many issues facing patentability of subject matter eligibility in various arenas where such issues are dominant.

The facts in Alice derive from the assignment of several patents from Sywcho Infrastructure Services Pty LTD to the petitioner Alice Corporation Pty Ltd.[7]The assigned patents related to a computerized scheme for mitigating settlement risk.  Specifically, the patents were designed to facilitate the exchange of financial obligations between two parties by using a computer system as a third-party intermediary to manage certain forms of financial conditions.[8]Upon receipt of the information, the intermediary would take the data and notify financial institutions to facilitate the approved transactions.

In 2007, CLS Bank filed an action against Alice Corp. seeking a declaratory judgment that the patentsassigned to Alice Corp. were invalid, unenforceable, or not infringed.[9] Alice Corp. counterclaimed, alleging infringement.[10] During the pendency of the case, Bilski v. Kappos[11]was decided by the Supreme Court. In Bilski, the Court determined that a mathematical formula for hedge risk was ineligible for patent protection. Upon the issuance of Bilski, both parties filed cross-motions for summary judgment.[12] The District Court responded to the motions finding that all the claims were patent ineligible because they were directed to an abstract idea.[13]  A divided panel of the United States Court of Appeals for the Federal Circuit reversed; however, the Federal Circuit granted a rehearing en banc, vacated the panel opinion, and affirmed the District Court’s opinion. [14]

B. Adoption of Mayo Analysis

In commencing its decision, the Supreme Court recited §101 of the Patent Act with reference to subject matter eligibility for patent protection, which provides:

Observing that it has for 150 years heldan implicit judicial exception for patent ineligibility for “laws of nature, natural phenomena and abstract ideas,”[16] the Court noted “this exclusionary principle as one of pre-emption.”[17]  In further explanation, the Court stated that laws of nature, natural phenomena, and abstract idea are “the basic tools of scientific and technological work”[18] and that the “‘[m]onopolization of those tools through the grant of a patent might tend to impede on innovation more than it would tend to promote it,’ thereby thwarting the primary object of the patent laws.”[19] Hence, the Court concluded that a distinction must be made between patents that claim the building blocks of human ingenuity, which “would risk disproportionately tying up the use of the underlying ideas,” and those patents that remain eligible by integrating the building blocks into further innovation.[20]

Upon further discussion, the Court incorporated the two-part analysis set forth in Mayo:

First, whether the claims at issue are directed to the patent-ineligible concept; and

Second, if so, whether the claim contains an inventive concept sufficient to transform the claimed abstract idea into a patent-eligible application.[21]

Applying the first step, the Court held that the claims were drawn to abstract idea of intermediated settlement.[22] Relying on its previous decision of Bilski, the Court noted that such ideas used by Petitioner’s patent are “fundamental economic practice long prevalent in our system of commerce and taught in any introductory finance class.”[23] Similarly, “intermediated settlement” like hedging in Bilski, is an “abstract idea beyond the scope of § 101.”[24] The Court rejected Alice’s argument that “abstract–ideas category is confined to ‘preexisting fundamental truths’ that ‘exist in principle a part from any human action’”[25] further confirming the similarity to Bilski.

Upon finding the judicial exception, the Court continued with the second step of its analysis to determine whether Alice’s claims contained a concept sufficiently inventive to have patent-eligible application.  Finding Mayo instructive, the Court further clarified that merely “appending conventional steps, specified at high level of generality”[26]was insufficient to constitute an inventive concept.  In order to be patent eligible, a patent must improve an existing technological process beyond the fact that the process is implemented on a computer.[27] Thereafter, the Court recited the 4-step method claim of Petitioner that included the following:

(1)   Creating shadow records for each counterparty to a transaction;

(2)   Obtaining start-of-day balances based on the parties’ real-world accounts at exchange institutions:

(3)   “adjusting” the shadow records as transactions are entered ,allowing only those transactions for which the parties have sufficient resources; and

(4)   Issuing irrevocable end-of-day instructions to the exchange institutions to carry out the permitted transactions.[28]

Upon examination, the Court concluded that the Petitioner’s claims did no more than mandate a generic computer to perform generic computer functions.[29] Based on precedent, the Court concluded that it was “not ‘enough” to transform an abstract idea into a patent–eligible invention.”[30]Anticipating the Court’s characterization, Alice argued that its claims were “system claims” because their process required “specific hardware” configured to perform “specific computerized functions.”[31] In response, the Court retorted “the system claims are no different from the method claim in substance” and cautioned against “interpreting §101 in ways that make patent eligibility depend simply on the draftman’s art.”[32]

After the decision in Alice, the USPTO issued preliminary examination instructions for examiners to assist in evaluating subject matter eligibility of claims involving abstract ideas. In particular, the USPTO withdrew notice of allowance of applications similar to Alice.[33] Upon withdrawal, applicants were given notice and, for those who already paid an issue fee, they were instructed to request a refund. [34]

In December 2014, the USPTO issued further instructions under Alice with a caveat that all claims were to be fully examined under each of the other patentability requirements.[35] As further instructions, the USPTO established a two–part analysis for Judicial Exceptions Flow Chart based on Alice.See Illustration 1.

The USPTO also provided summaries of case law illustrating laws of nature, natural phenomena, and abstract ideas that fall within the judicial exception, which include, but are not limited to the following[36]:

Limitations that qualify as significantly more when recited in a claim with judicial exception are also listed and include, but not limited, to the following[44]:

As reflected in the summaries provided by USPTO, the courts themselves have implemented Alice by often referring to the two-part analysis as the Mayo/Alice framework. Overall, it appears courts have demonstrated that they will evaluate software claims utilizing the framework established by the Supreme Court while being “careful to avoid allowing the typically convoluted claim language--‘patent-ese’ to obfuscate the general purpose and real essence of software patent claims.” [49]However, some courts post–Alice have found eligibility based on being an inventive concept.[50]In a recent study of the top federal courts with the most patent filings[51] by California State University Long Beach, the impact of Alice was examined as to dismissals of actions based on Alice. Notably, over 7000 patent cases filed with federal courts were examined from June 2013 through June 2014 and from June 2014 through June 2015. Overall, the study found that there was a significant drop of patent infringement filings in all but two districts[52]and a recognizable increase of Alice motions based on under either a Motion to Dismiss pursuant FRCP 12 (b)(6) or Motion for Judgment on the Pleading pursuant to FRCP 12(c).  The most common basis for denial of a these pre-trial motions was based on the motions conflicting with the claim construction process, which is a pre-trial motion used in a patent infringement case to define the scope of property right being enforced in the lawsuit. While this appears to be a valid basis for denial of a motion based on Alice, it would appear that an Alice analysis would eliminate the need for a claim construction. Notably, the Eastern District to Texas, which has the highest patent filings in the country, recently adopted a new standing order with reference to letter brief requirements to address the numerous Alice motions filed in this court.[53] Previously, most Alice challenges were dismissed without prejudice until a claim construction was facilitated; however, this recent order may be an indication that Alice challenges could become as routine as other pre-trial motions in patent cases.

The impact of Alice is vast. It is apparent that defense attorneys have fully embraced Alice by the influx of pre-trial motions challenging patents claim. Moreover, there is some showing of decrease of patent infringement lawsuits. However, whether companies will no longer be challenged in court by a patent assertion entity (PAE), patent holding company (PHC) and non-practicing entity (NPE) or “patent trolls” is still questionable. Even if they are challenged, is Alice enough? Will further legislative action be warranted to provide a different type of protection?  While time will provide these answers, the Supreme Court was clear that the broad language of § 101 would still grant software developers protection but the two-part test in Alice has narrowed the scope of that protection. Software developers now have the burden of proving their claims provide substantially more and that burden cannot be overcome by creative writing. Therefore, it is important to observe the recent rulings as well as the USPTO’s illustrations to determine eligibility prior to seeking patent protection. 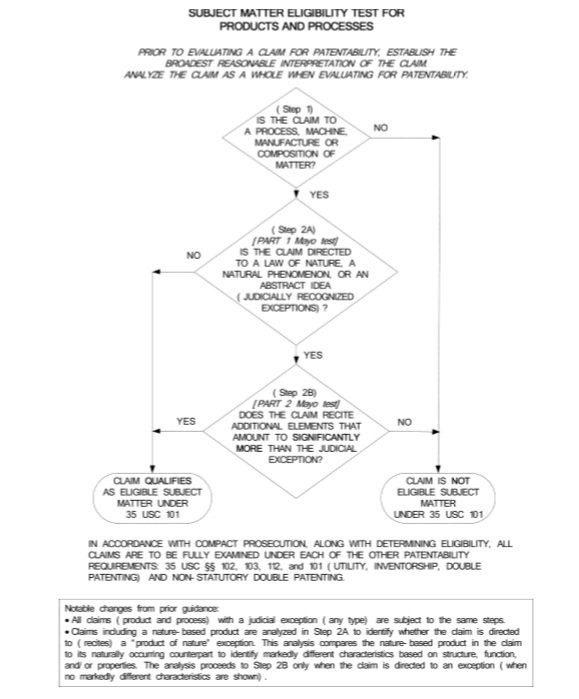