In Idenix Pharmaceuticals, L.L.C. v. Gilead Sciences Inc.,[1] the Federal Circuit invalidated U.S. Patent No. 7,608,597 (“the ’597 patent”) for lacking both enablement and written description. In doing so, the court affirmed the district court’s overturning of a $2.54 billion jury verdict. This comment will discuss the court’s findings and focus on written description and claim construction issues, emphasizing how the broad constructions advanced by Idenix Pharmaceuticals (“Idenix”) ultimately undermined its patent’s validity.

Idenix owned the ’597 patent, claiming methods of treating hepatitis C virus (“HCV”) infection,[2] which is responsible for tens of thousands of deaths per year in the United States.[3] The compounds involved are nucleosides, consisting of five-membered rings with four carbon atoms and one oxygen atom, with the carbons numbered beginning at 1’.[4] Substituents at each ring carbon can be “up” or “down” in orientation with respect to the ring, as follows:[5]

The specification includes 18 Markush formulas with multiple variables.[6] Claim 1, the only independent claim, recites: “A method for the treatment of a hepatitis C virus infection, comprising administering an effective amount of a purine or pyrimidine β-D-2′-methyl-ribofuranosyl nucleoside or a phosphate thereof, or a pharmaceutically acceptable salt or ester thereof.”[7] Gilead Sciences (“Gilead”) had also developed anti-HCV drugs, including sofosbuvir, containing a 2’-methyl-up and 2’-fluoro-down:[8] 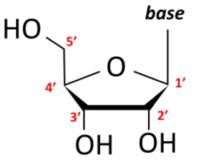 Idenix sued Gilead in 2013 for patent infringement in U.S. District Court for the District of Massachusetts, alleging that imminent regulatory approval and launch of sofosbuvir would infringe the ’597 patent.[9] After transfer to the District of Delaware, the district court at a Markman hearing construed the structural limitation “β-D-2′-methyl-ribofuranosyl nucleoside” in claim 1 to require “a methyl group in the 2’ up position and non-hydrogen substituents at the 2’ down and 3’ down positions.”[10] The court further construed terms so the claim compounds required efficacy for treating HCV.[11]

Chief Judge Prost authored the precedential 2–1 majority opinion, affirming the district court’s grant of JMOL for enablement and also finding the district court erred in failing to grant JMOL for written description.[17] The court reviewed the denial or grant of a motion for JMOL under regional circuit law,[18] here the Third Circuit, which exercises plenary review.[19] Granting JMOL, then, was appropriate when “a reasonable jury would not have [had] a legally sufficient evidentiary basis to find for the party on that issue.”[20]

(2) how routine any necessary experimentation is in the relevant field;

(3) whether the patent discloses specific working examples of the claimed invention;

(4) the amount of guidance presented in the patent;

(5) the nature and predictability of the field;

(6) the level of ordinary skill; and

The parties agreed that the level of ordinary skill in the art was “high” but disagreed on the remaining factors.[23]

Collectively, the court concluded that the Wands factors weighed toward invalidation for lack of enablement.[24] With respect to the quantity of experimentation needed—a significant though non-dispositive factor—the court affirmed that the jury could only have found it was so high that it favored non-enablement.[25] Gilead’s expert indicated that “billions and billions” of compounds met claim 1’s structural limitations, and Idenix’s expert only managed to reduce the number to “millions or at least many, many thousands.”[26] The amount of experimentation would be further heightened because each new compound required screening for anti-HCV activity.[27] This “immense breadth” of experimentation favored non-enablement, and the court applied similar reasoning to the invention’s scope.[28] The court found the presence of working examples and amount of guidance factors favored non-enablement because data illustrating the key modification of 2’-methyl-up were only a starting point.[29] Additionally, both parties’ experts testified about the nucleoside chemistry’s unpredictability, weighing toward non-enablement.[30] The only factor that favored enablement was how routine the necessary experimentation—independent synthesis of new compounds—would be.[31] Expert testimony conflicted, so the court held that a reasonable jury could have found the synthesis routine.[32]

The court then considered the written description requirement,[33] to fulfill which the patent owner must indicate his or her “possession of the invention”[34] at the time of filing the patent application as indicated by “an objective inquiry into the four corners of the specification.”[35] Both parties focused on whether Gilead’s sofosbuvir was within the written description.[36] Gilead noted that the ’597 patent did not disclose sofosbuvir and that Idenix admittedly did not synthesize it until a year after filing the application.[37] Idenix argued that claim 1 was directed to the entire genus of 2’-methyl-up compounds, enabled by sufficient examples.[38]

The court found adequate written description for the compounds within the ’597 patent’s formulas; however, the claimed genus reached beyond those formulas, and so for the genus as a whole, there was no way to distinguish which compounds had anti-HCV activity.[39] Accordingly, the court invalidated the patent for lack of written description.[40] The court further observed that the absence of sofosbuvir and other 2’-fluoro-down compounds was “conspicuous,” because although seven of the patent’s formulas allowed for 2’-methyl-up, none allowed for 2’-fluoro-down.[41] Idenix, then, had not shown possession of such embodiments at the time of filing.[42]

The court did not need to decide the written description issue at all. After affirming invalidity for lack of enablement, the written description issue would have been moot.[43] The court made much about the absence of 2’-fluoro-down compounds in the specification, but this discussion was non-essential to find invalidity for lack of written description. For the majority, it was enough that there was simply no way to distinguish between members of the genus with or without the claimed anti-HCV activity. Given the unpredictability of medicinal chemistry, it would be extremely difficult—if not impossible—to accumulate sufficient data to show that an entire genus would have a common claimed effect. This precedential ruling could cripple method-of-treatment claims involving genera of compounds. Whether this was the court’s intent is unclear.

Dissenting from the majority opinion, Judge Newman would have affirmed the jury’s finding that the claims, “correctly construed, are valid and not infringed.”[44] In her view, because the specification provided anti-HCV data exclusively for 2’-hydroxyl-down nucleosides, a reasonable jury could have understood the claims to be narrowed to the 2’-hydroxyl-down nucleosides because of that anti-HCV activity.[45] The patent would then meet both section 112 requirements.[46] Judge Newman’s dissent implicitly questioned the district court’s claim construction, noting that Gilead had argued for a similar interpretation at the Markman hearing.[47] She found substantial evidence that sofosbuvir was not within the scope of the claims as the reasonable jury could have viewed them, so there could not be any infringement.[48]

Although only discussed in a footnote in the majority opinion, the claim construction played an outcome-determinative role. The Markman hearing gave Idenix its desired construction; had the district court adopted Gilead’s proposed narrower construction, excluding 2’-fluorine-down, Idenix would have been unable to argue infringement.[51] By the time the case reached the Federal Circuit, however, the broader construction needed to bring the litigation actually undermined the patent’s validity. Given that the standard of review for factual issues in claim construction is clear error,[52] Idenix stood little chance of convincing the court that the district court erred in taking up its own construction. Had the case arisen with different procedural posture — such as inter partes review of the ’597 patent — Idenix might have argued for a narrower and less risky construction from the beginning, and the ’597 patent might have survived.

Even under the claim as construed, however, it is reasonable for a jury to have narrowed the scope implicitly to compounds possessing a 2’-hydroxyl-down. As the dissent noted, the only compounds fully enabled by the specification had a 2’-hydroxyl-down,[53] and so the jury could have understood the claim’s requirement of “non-hydrogen substituents at the 2’ down” position to mean, effectively, 2’-hydroxyl-down. This understanding would not, as the majority suggested, wholly disregard the given construction, but would simply take a narrower view of it.

[11] Id. In a separate opinion, the district court construed the preamble “method for the treatment of a hepatitis C virus infection” as a narrowing functional limitation. In combination with the “effective amount” language, the district court found that the language “limit[s] the scope of the claims to the use of some set of compounds that are effective for treatment of HCV.” Idenix Pharm., Inc. v. Gilead Scis., Inc., No. 13-1987-LPS, 2016 WL 6802481, at *6 (D. Del. Nov. 16, 2016).

[26] Id. at *3–4 (also noting how the district court “meticulously calculated” that, for instance, Formula XVII alone disclosed more than 7,000 compounds).

[47] Id. at *11; but see Idenix Pharm., 2019 WL 5583543, at *2 n.3 (majority opinion) (“The dissent, making an argument not advanced by Idenix at trial or before us, reaches the opposite conclusion only by disregarding the district court’s binding claim construction.”).